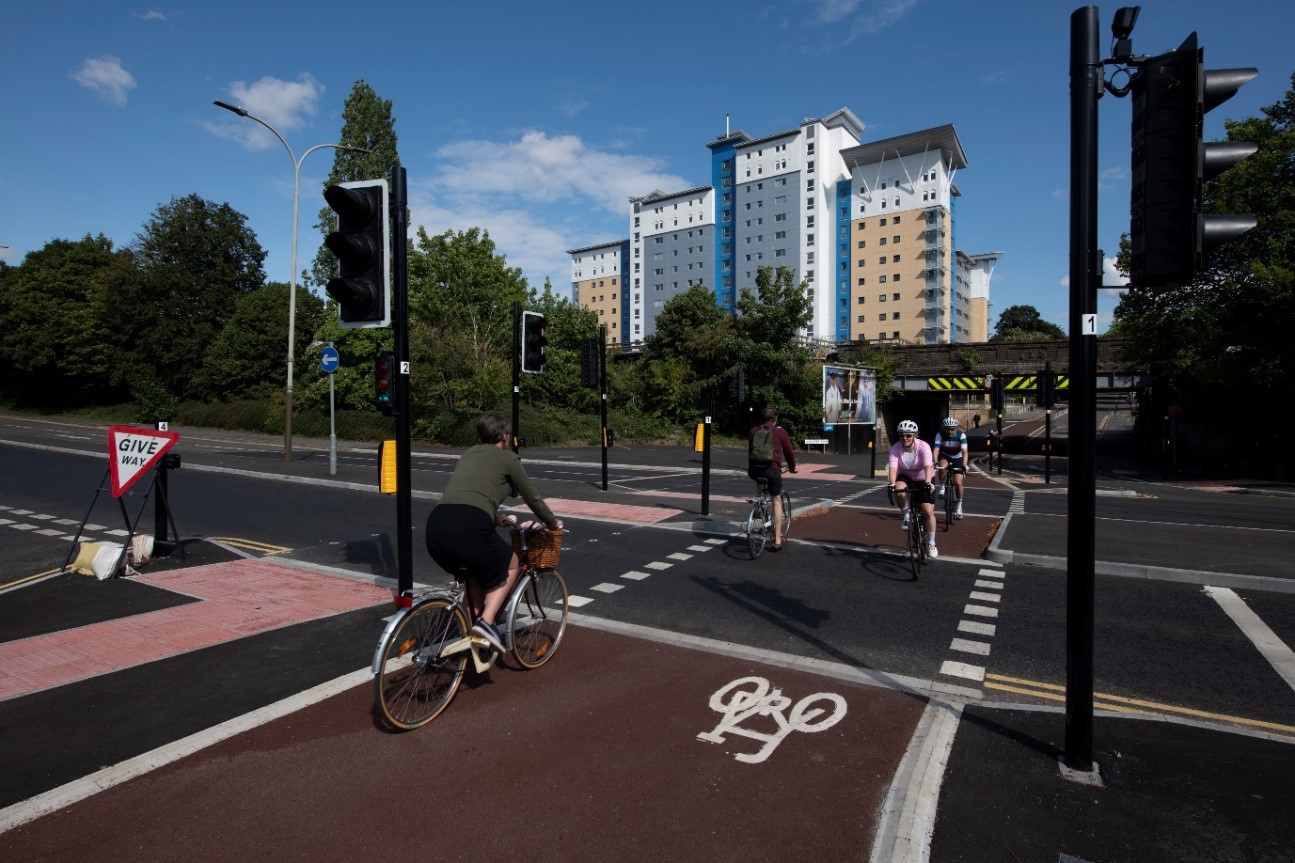 Connecting Leicester has seen a number of significant improvements to create and provide a safe and connected city. You can see completed transport projects below.

As part of our successful bid to the Transforming Cities Fund, works were completed in March 2020 as part of Tranche 1 to improve a stretch of Abbey Park Road to create a two-way cycle track.

It is important that we extend and provide safe links into outlying neighbourhoods and encourage more people to make the shift from the car to more sustainable forms of transport. A cycle track has been created on the opposite side of the road to Abbey Park, the footpath has also adjusted with the existing central reservation removed, and two lanes of traffic maintained.

Works were carried out to improve a stretch of the road linking Leicester’s Golden Mile to the city centre and create a safer and more attractive route for people walking and cycling along Belgrave Gate, between Haymarket Bus Station to Belgrave Circle.

New off-road cycle lanes were created on both sides of Belgrave Gate, between Abbey Street and Burleys Way and footpaths reconstructed. The road was resurfaced, and bus stops and new loading bays provided.

Improvements were also carried out on Burleys Way roundabout to create a new shared footpath and cycleway running underneath the flyover, providing a more direct and safer route along Belgrave Gate.

The Lotus Flowers public artwork was relocated to nearby Archdeacon Lane next to Charter Street, close to the new bridge and entrance into Abbey Park.

North of Burleys Way, a separate cycleway and footpath has now been created along the central reservation, to link in with improvements made to Belgrave Circle following the removal of the flyover.

Following the opening of Savoy Street – which provides a new dedicated route for buses – the city centre pedestrian zone has been extended to include Haymarket and part of Church Gate. A range of improvements have been carried out to create a more attractive environment and encourage greater footfall to support local businesses and new investment in the area. The project also included the provision of a new taxi rank on Belgrave Gate near the theatre steps.

We also transformed the area around the clock tower by repaving in a natural porphyry stone paving. This has created a significant area of open space in a key area of the city centre.

Beaumont Walk and Lismore Walk were upgraded to provide well-connected, accessible and safer routes for pedestrians and cyclists. The paths were widened and resurfaced, and improvements made to street lighting and signage.

Extensive works were carried out and the underpass beneath Strasbourg Drive near Lismore Walk was filled in and the area re-landscaped. New shared footpaths and cycle routes to the north and south of Strasbourg Drive were created. A new parallel zebra crossing was also installed to further improve the route for people walking and cycling.

We completed pedestrianisation of part of Granby Street from Northampton Street to St George’s Way.  As well as infrastructure improvements on Northampton Street and Dover Street to create a high-quality gateway into the city centre, key features of the scheme include:

Work has been completed on Phase 1 of the scheme  to widen parts of the Great Central Way footpath to provide more space for users of the popular route in and out of the city. The scheme saw the widening of the existing path from approximately 2.5m to between 3m and 3.5m, to enable cyclists and pedestrians using the route to continue to do so safely.

A new bus lane and 30mph zone has been introduced to help improve traffic flow along Groby Road – a busy route into the city. The measures have been installed along an inbound section of the A50 Groby Road, from before its junction with Mary Road, to just past the junction with Medina Road.

The 30mph zone now extends along the entire length of the new bus lane.

These streets form a key route into the city centre from the south and especially for buses. Footways have been widened and segregated cycle lanes introduced. Bus stops and taxi ranks were relocated and the whole space has been made more user friendly.

A new path was created within Town Hall Square to link to Dolphin Square and Leicester Market.

This scheme was part funded by the European Regional Development Fund.

The Lancaster Road cycle improvement scheme has been delivered as part of the Connecting Leicester programme to provide a safer and more direct cycle route between the Clarendon Park area and the city centre. We have created a two-way cycle lane from the Queens Road and Victoria Park Road junction across Victoria Park and adjacent to Lancaster Road. The new cycle route is approximately 1km in length.

New cycle paths have been created across Victoria Park adjacent to the existing footpath connecting Queens Road and Peace Walk, along the full length of Lancaster Road, including a new cycle path through the edge of Nelson Mandela Park. The new route links with the cycle lane on Welford Road, creating a continuous and safer route for cyclists to and from the city centre. This scheme also delivered improvements to existing footways and crossing facilities to benefit pedestrians.

As part of the scheme, Lancaster Road has been made one-way between its junction with De Montfort Street and the ring road Meaning traffic can no longer turn onto Lancaster Road from Tigers Way.

As part of the continuing improvements to the market area, surrounding streets were revamped to provide a more attractive environment for pedestrians and cyclists.

By demolishing an old building, we have created a stronger and more direct link connection between the Market and Town Hall Square through Dolphin Square.  This scheme was part funded by the European Regional Development Fund.

Work is complete on a range of improvements to St George Street. This has helped revamp an important gateway into Leicester city centre and restore a lost link to the Cultural Quarter.

The stretch of road – between its junctions with busy St George’s Way and Queen Street – has been completely overhauled and now features a series of rainwater gardens along the edges of the street which will help provide better drainage.

The main footpath has been reconstructed in resin bound gravel, and the stretch of road between Queens Street and the car park serving Mercury Place has been pedestrianised. High quality block paving now marks the entrances to St George’s Churchyard, Mercury Place and the existing children’s play area.

A lawned area has also been created at the junction with St George’s Way, and new tree planting is due to take place later this year. through to the St George’s Cultural Quarter.

The project was supported through the Getting Building Fund, a pot of Government money awarded to the Leicester and Leicestershire Enterprise Partnership (LLEP) for projects to help support economic recovery following the pandemic.

As part of the ongoing Connecting Leicester programme, we’ve improved the link between King Street, De Montfort University and Bede Park by making improvements to the York Road area. This has included the pedestrianisation of York Road leading onto Oxford Street from Upper Brown Street, and also towards Welford Road. Vehicle access has been retained for residents and businesses only.

Newarke Street car park has also seen improvements with traffic now required to turn left onto Welford Road when departing. Bonners Lane has also been made one way towards Oxford Street - traffic needing to access Bonners Lane can do so by turning left into Grange Lane.

A segregated cycle way has been installed on Grange Lane with new crossing points. Public access has also been improved with new surfaces on the footways and carriageway.