Our website uses cookies to help us keep improving. If you continue using the site, we'll assume you're ok with this. Tell me more

Get the latest services updates and advice for residents and businesses

Friday 8 May 2020 marks 75 years since Victory in Europe Day: the day when the Second World War finally came to an end in Europe. The long-awaited news resulted in spontaneous celebrations across the nation as people from all walks of life came together to mark the moment.

The coronavirus outbreak means that public events marking VE Day 75 have been postponed across the country – but there are still plenty of things you can do to celebrate at home and pay tribute to the Second World War generation.

The Government has created some great resources to help everyone get involved in VE Day 75. Find ideas for making bunting, baking eggless fruit cake, and choosing music for your 1940s stay-at-home party at GOV.UK.

The Union Flag will be flying over City Hall and Town Hall across the bank holiday weekend, while Leicester’s Market will be dressed up with bunting. Why not decorate your home in red, white and blue too?

Learn how to Lindy Hop

Get ideas from Bletchley Park

Bletchley Park will be marking the 75th anniversary of VE Day with a digital ‘Nation’s Toast’ at 3pm, and a special recording of a VE Day speech by ‘Prime Minister Sir Winston Churchill’. Find out more on the Bletchley Park website.

At 9pm on Friday 8 May, join the nation in a rousing rendition of Dame Vera Lynn’s ‘We’ll Meet Again’ on BBC1. You can find the lyrics on YouTube.

We’ve posted some of your pictures and memories on a special VE Day 75 page. Go to the Story of Leicester website.

Remembrance and reflection at home

At 11am, join the nation in a two-minute silence of reflection and remembrance.

If there’s a horn player in your family or on your street, encourage them to play the Last Post at 11am, followed by the Reveille at the end of the two-minute silence or watch the Royal British Legion's virtual tribute on YouTube, which includes the Last Post.

A special VE Day 75 service from Leicester Cathedral will be available on the cathedral’s website and YouTube channel from 12 noon. The service will include contributions from the Bishop of Leicester, the Lord-Lieutenant for Leicestershire and the Lord Mayor of Leicester.

From 2.45pm-3.45pm, the BBC’s coverage will include extracts from Winston Churchill’s victory speech, recreating the moment when peace in Europe was declared 75 years ago, and a message from the prime minister.

At 3pm, raise a glass or a cup and join the Nation’s Toast: “For those who gave so much, we thank you.”

Listen to a message from HM The Queen

The Queen will address the nation on BBC1 at 9pm – the same time that her father, King George VI, made his radio broadcast in 1945.

At 9pm on Friday 8 May, join the nation in a rousing rendition of Dame Vera Lynn’s ‘We’ll Meet Again’ on BBC1. You can find the lyrics on YouTube.

The British Legion has teamed up with the National Literacy Trust to create a series of free, downloadable lesson plans and assemblies aimed at Key Stages 2, 3 and 4.

Share your family histories and messages of remembrance on social media using #VEDay75.

Leave a message on the Royal British Legion’s website to remember the brave men and women who lost their lives in World War II.

Listen to memories of VE Day in Leicester, recorded with local people in the 1980s and preserved by the East Midlands Oral History Archive at the University of Leicester.

Snaps from the past 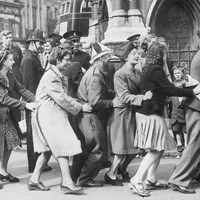 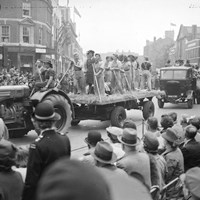 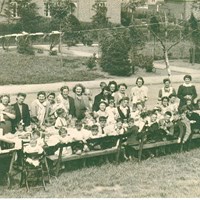 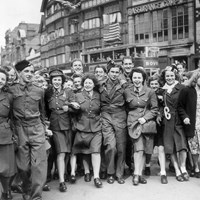 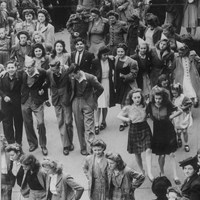 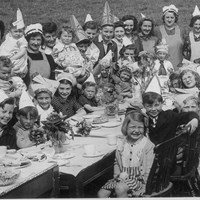 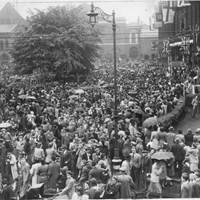 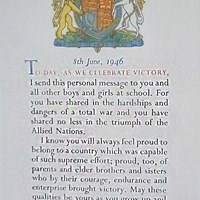