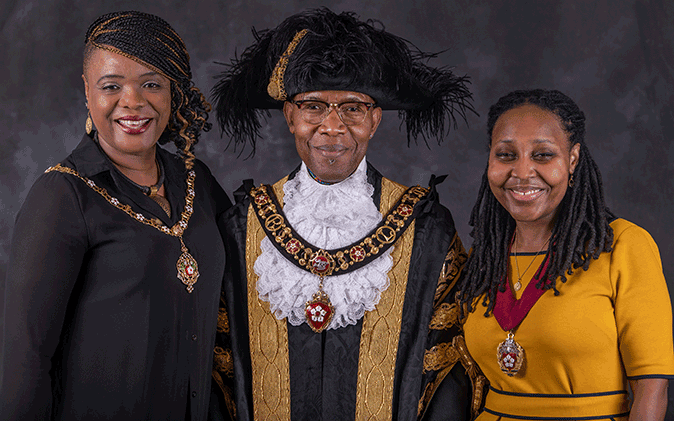 The Lord Mayor is Leicester’s first citizen and is elected each year at Annual Council. The Lord Mayor for 2022-2023 is Councillor George Cole.

Inviting the Lord Mayor to an event

Born in Kingston Jamaica, Councillor Cole came to England in 1964, and is now a British Citizen. He left school with no qualification at the age of 15 and struggled to find direction for a while until after his first degree, he became a Principal Computer Design Engineer. He later progressed to a Principal Systems Design Engineer, gaining Chartered Engineer status, followed by nearly thirty years as a Senior University Lecturer.

During this time, he was a Radio Presenter and Producer, ran his own businesses and became a magistrate. He has contributed to the community as a volunteer in many roles and is currently a city councillor, representing Western Ward, and is Chair of the African Heritage Alliance, an organisation established to address the inequalities experienced by the African Heritage Community caused by racism.

He is married, is a father of two and is looking forward to what the next phase of his life has in store. He believes you are as young as you feel and feels like every day is Christmas. As Lord Mayor of Leicester, he will be supported throughout the year by his wife, Denese and daughter, Serenah.

Councillor Cole has chosen to support the work of the Sickle Cell Society.

Role of the Lord Mayor

The role of the Lord Mayor is primarily a ceremonial one, maintaining and promoting the interests of the city and its citizens, and attending a variety of engagements during the year.

The Lord Mayor is an elected city councillor. Throughout their civic year of office, they must remain impartial and are unable to be involved in any political or contentious events/issues. In this respect, the Lord Mayor’s role differs from that of the Elected City Mayor, which is a political role and is responsible for the executive decision making of the council.

Information on former civic office holders is retained by the Member and Civic Support Team and can be made available by sending them an email to lord.mayor@leicester.gov.uk

Send an email to the Lord Mayor's office: lord.mayor@leicester.gov.uk