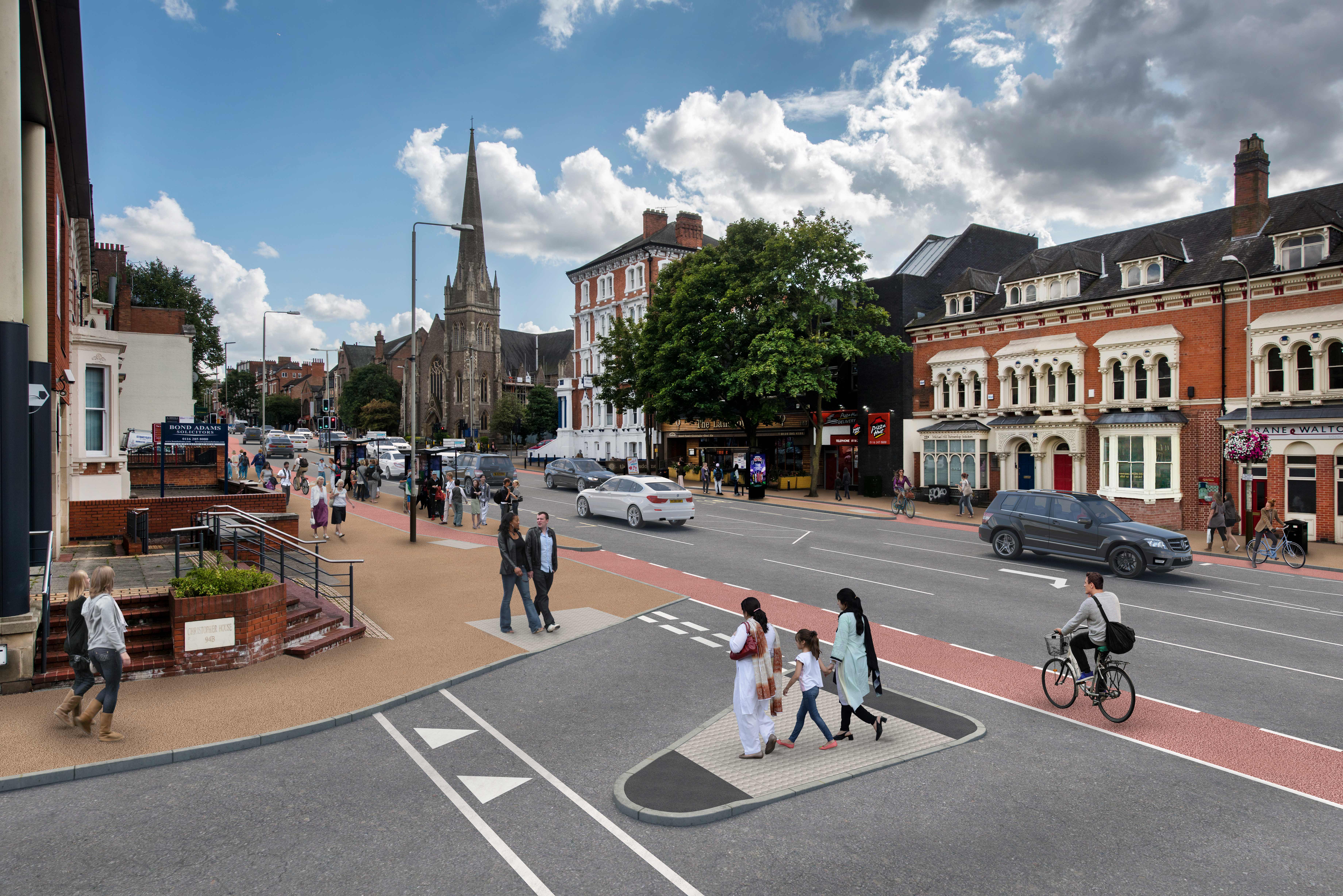 As part of the wider Connecting Leicester programme, works are underway to create a safer and more attractive route for cyclists and pedestrians on London Road. This scheme is part funded by the European Regional Development Fund.

By reallocating a small amount of road space, we will be able to introduce dedicated off-road cycle lanes, better bus stops, improved road crossings and wide, high quality pavements. This will help create a much safer and more appealing route for cyclists and pedestrians without compromising this busy route for other road users. It also allows us to introduce some ambitious improvements around the important public transport interchange at the railway station. Work is being carried out in phases to help minimise disruption to local businesses, traffic and other road users.

The outbound bus lane between Conduit Street and Evington Road has now been permanently removed. New cycle lanes will be installed on both sides of the road. A raised kerb alongside the main road will also feature to offer more protection to cyclists and help prevent illegal parking on the cycle lanes.

The scheme will also see the construction of 'Dutch-style' bus stop bays similar to those constructed on Welford Road. These will channel cyclists behind the shelters, helping to improve safety for all road users.

New cycle lanes and improved pavements will continue in front of the railway station, where a new bus-only lane will also be created, which will be camera enforced.

Side roads will be raised to pavement level at their junctions with London Road, helping to give priority to pedestrians and cyclists. Traffic signals at major junctions will also be revamped to give cyclists a head-start and reduce conflict with traffic turning left.

We have worked closely with input from local bus companies and user groups, city cycling groups and the family of cyclist Sam Boulton, who was tragically killed in an accident outside the railway station. We also asked for expert guidance from Brian Deegan, one of the main authors of Transport for London's cycling design standards.

The £3.9m scheme is part of the wider Connecting Leicester programme, which is improving routes into and through the city centre and helping to make it more attractive to residents, visitors, businesses, investors and developers.

The cycling improvements are backed by £1.2 million from the European Regional Development Fund.

The remaining works saw the stretch of road between its junctions with Waterloo Way and Evington Road completely resurfaced.